I recently tweaked the way I use my password manager, and it's already saved me considerable frustration. Not only that, it's also brought my usage more in line with the Unix philosophy of using tools that do only one thing, and do it well—and illustrated, once again, why that philosophy is so great.

This post explains my tweak, and how you can apply it. But first, some background.

As Troy Hunt, the mad genius behind HaveIBeenPwned, is fond of writing, The only secure password is the one you can’t remember. That is, if you can remember a password, then it's probably too short to be secure. If it's not, it might well be one you've used before—which is even worse, since it means someone who figures out one of your passwords suddenly has access to much more of your digital life. So if you want to avoid insecure passwords, you basically have to make a record of your passwords.

And that basically means using a password manager to store an encrypted vault containing your passwords. If you pick a good password manager, you can have it automatically generate a secure password for you, and automatically type that password in whenever you log in. Instead of struggling to remember whether your password is 123qwe or 1q2w3e (both in the top 25 most-used passwords, by the way), you're using a bulletproof password like F^EHHtSIbPyDm2&kHsPhSppNYwzQDg.
And you're having that password filled in for you automatically, without any memory struggles at all. It's really great.

It's really great … right until it's not. And then it's really, really, not. As anyone who's used a password manager can tell you, eventually autofill will fail you. Maybe you need to log in on a computer or mobile device that doesn't have your passwords synced to it. Maybe you have to use a service that idiotically disables autofill in your browser. Maybe you'll be on the phone with tech support on a spotty cell connection during a hail storm. And, when you are, you'll really wish you could tell them that your password was qwerty instead of F^EHH​tSIbP​yDm2&k​HsPhSp​pNYw​zQDg.

What you'd really like is to have a password that is just as secure as F^EHH​tSIbP​yDm2&k​HsPhSp​pNYw​zQDg without being anywhere near as difficult to type (or shout during that hail storm). Fortunately, this is a famously solved problem: 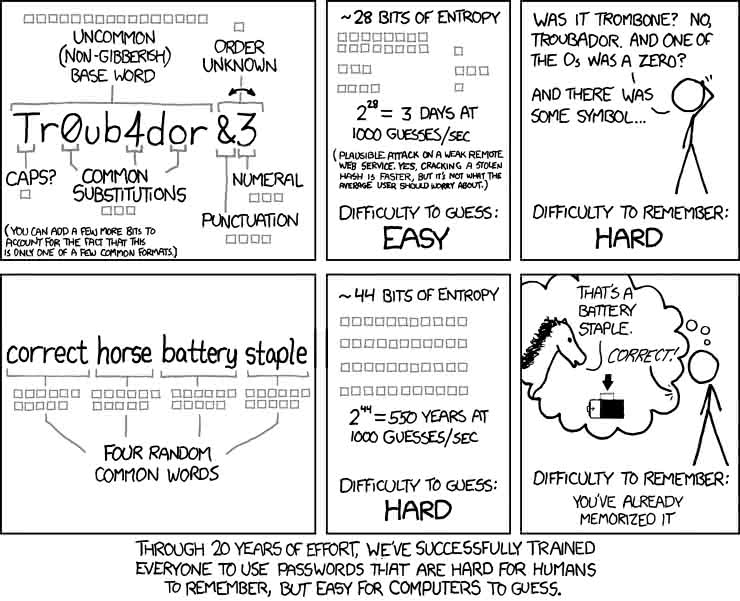 All you need to do is to use passphrases consisting of simple words chained together, creating something long enough to be secure while understandable enough to be easy to remember for long enough to type in. If you're as paranoid as I am, you'll throw in some special characters, capitalization, or numbers, too, so that your final password is something like 2222@​Correct@​Horse@​Battery@​Staple. That's just as secure as the unpronounceable password up above, and way easier to shout during a hail storm.

Of course, you really don't want to be inventing these sorts of passwords on your own. For one thing, humans aren't that good at randomness; for another, that just sounds like a lot of work. Fortunately, you don't have to: Bart Busschots has put together an online tool that automates generating passwords like that (with user-configurable settings about how many words, numbers, and special characters to use). I don't know why any of the top password managers haven't incorporated a system like this into their password generating code (although KeePassXC, to its credit, does let you generate a passphrase), but no matter what password manager you use, you can go to that site, get your passwords, and then save them to your preferred password vault.

It gets even better

If that was the best we could do, it'd be pretty great: we'd trade some inconvenience when we generate the password (when we're likely not time constrained) in return for much greater convenience when we enter the password without autofill. But, with the right password manager, we can do much better than that—and we can do it in a way that exemplifies the advantages of the Unix philosophy of having programs serve one, and only one, function.

Specifically, we can take advantage of the fact that Bart Busschots—in addition to running the website mentioned above—released a very Unix-y Perl script that generates the same sort of passwords, right from the command line. I won't go through the details of how to set up or configure the Perl script, in part because Bart already lays out the details in two excellent blog posts. Suffice it to say that, after following those directions, you can configure his script to produce exactly the sort of password you'd like, whenever you type "hsxkpasswd" in your terminal. (Or, if you agree that that's too many consonants in a row to reliably remember, whenever you type whatever you've aliased it to; I picked "xckd-pass").

Fortunately, there's a tool called Pass that bills itself as "the standard unix password manager". This is a pretty bold claim, especially for a program that was written in this century. But, despite the pomposity, Pass seems to back up its claims with real performance.

Password management should be simple and follow Unix philosophy. With pass, each password lives inside of a gpg encrypted file whose filename is the title of the website or resource that requires the password. These encrypted files may be organized into meaningful folder hierarchies, copied from computer to computer, and, in general, manipulated using standard command line file management utilities.

That means we can use Pass without trusting it at all; all the encryption is handled by GPG (the GNU Privacy Guard, which provides some of the best crypto available anywhere). It also means that we don't need to rely on any external software to sync our passwords, but can sync them the same way we would sync any other file. (I use a git sever running on a Raspberry Pi, but Github, NextCloud, Dropbox, or any other way of syncing files would work too).

And, most importantly for our purposes, it means that Pass plays well with standard input. Specifically, we can create a new username/password pair with the command "pass insert username", and then Pass will prompt us to type a password, and then to retype it to confirm. This means that we can use pipe the output from hsxkpasswd into Pass. We could do that directly, but we can simplify things with an extremely simple shell script that does this for us:

Once we have this script set somewhere in our path, we can just type "pass- new [pass-name]" and have a xkcd-style password automatically saved in our Pass database. And then, of course, we can access it with all the normal Pass commands, like "pass [pass-name] -c" to copy the password to our clipboard.

So, bottom line: What have we done, and what did we accomplish? Well, we:

Having done all this, we can use a single command to create a new passphrase and automatically add that passphrase to a password manager. That passphrase is long enough—and contains enough special characters and numbers—to be just as secure as any impossible-to-pronounce-or-remember password that our password manager might have generated but is still much easier to type in when our autofill inevitably fails us. And all this has been possible because two tools, written entirely independently, could be easily combined because both followed the Unix philosophy.